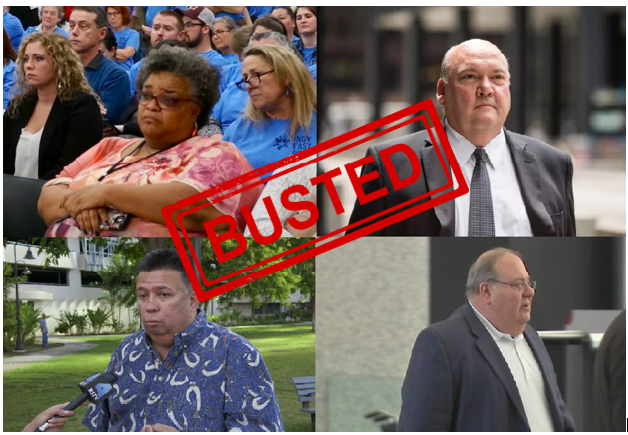 Every paycheck, a portion of union members’ hard-earned money is automatically deducted to cover union dues. They don’t have a say in how the money is spent, they are just left to trust their union leaders to use the dues money to represent them and their interests.

But cases of labor union leaders violating the trust of the members they claim to represent through illegal activity is a persistent problem that unions refuse to address.

As a summer wrap up, below are the latest and most noteworthy labor rackets.

Former Indianapolis teachers’ union President Rhondalyn Cornett stole more than $100,000 from dues-paying teachers. Her lucrative side hustles also included Cornett writing “checks to herself from a union bank account and us[ing] a union debit card in order to withdraw cash and pay for personal expenses.”

A former Hawaii union leader of the International Brotherhood of Electrical Workers Local 1260 and members of his family were indicted for massive fraud and embezzlement. The 70-count indictment charged Brian Ahakuelo, his wife, and his sister-in-law. From thousands of dollars in unauthorized purchases on union credit cards to hiring family members for union jobs that didn’t exist, Ahakuelo also rigged elections to increase dues, which caused the union’s 3,000 members to pay an additional $3.7 million in dues over 18 months.

Rodney Capello, a former Hawaii business manager and secretary-treasurer of a division of Laborers International Union of North America, was charged with embezzling nearly $200,000 in funds, despite his annual salary that exceeded $200,000.

Chicago’s top Teamsters boss John T. Coli Sr. pleaded guilty to extortion involving $325,000 in secret cash payments from Cinespace Chicago Film Studios and a false income tax return. According to his plea deal, his scheme with Cinespace paired with other freebies resulted in Coli illegally receiving “more than a half million dollars in money and benefits while managing to cheat the state and federal government out of $117,500 in taxes.” In 2017 he made $385,000—making him one of the highest paid union figures at the time.

John Matassa, Jr., former secretary-treasurer of Independent Union of Amalgamated Workers Local 711, was sentenced to prison for embezzling funds from the Chicago-area union that helped put “his wife on the union payroll for a no-show job” and allowed him to cheat the government out of social security payments.

South Carolina’s John Sammons, former president of American Federation of Government Employees Local 1872, was indicted “on five counts of mail fraud and one count of theft in unspecified sums from the union.”

A former Connecticut union leader—Thomas Popillo—pleaded guilty to embezzlement and theft of labor union funds. Popillo stole over $37,000 from the Communications Workers of America Local 81266 while he was president and secretary-treasurer.

It’s time for labor union leaders at all levels to address the problem of union officials abusing their power and hurting their own members. Such behavior is certainly not “pro-worker.”