The Wall Street Journal published a revealing story about the Janus case before the U.S. Supreme Court that challenges the payment of forced-fees to unions by public employees.

The premise of the case: All public-sector collecting bargaining is political.

If Janus wins, teachers and other public employees will be able to keep their jobs even if they do not pay any fees to the union. The threat is already having a good effect; unions are realizing that public employees may be given that choice, so they are awkwardly reaching out.

The WSJ article features some revealing information about the far-left American Federation of Teachers (AFT)—and our own teachers’ union executive, Denise Specht, head of Education Minnesota, which affiliates with both the AFT and NEA. Specht, a former kindergarten teacher makes about $184,000 a year. The union took in $57 million from teachers last year; $21 million was spent on union salaries and benefits:

The threat of the Janus case has galvanized teachers unions across the U.S…. “We’re having a kind of ‘This is who we are, this is who you are, how can we better serve you?’ conversation,” said Denise Specht, president of Education Minnesota, which has been canvassing some of its 76,000 members.

One frequently employed union strategy is the use of legally-binding recommitment cards, in which members affirm their intent to remain part of the union regardless of the outcome of the Supreme Court case. Education Minnesota has signed up about 80% of its members, according to a spokesman.

Yes, and Education Minnesota raised dues another $14 a year to pay for that “getting to know you”  campaign called “The Power of We” that is designed to trap teachers.

I wrote about the campaign in The Wall Street Journal last fall. You can read the details here.  The “renewal card” campaign by Education Minnesota was cited in several amicus briefs before the Court as evidence that the Court must insist that unions get affirmative permission from employees before taking any fees or dues. Otherwise, a win for Janus could be “a dead letter.”

When I was on the steps of the Supreme Court just this past Monday, I almost ran right into Randi Weingarten, head of American Federation of Teachers (AFT). Minnesota teachers are forced to affiliate with Randi and the AFT; the teachers union in Minnesota is one of several states that affiliate with three national unions (AFT, NEA and the AFL-CIO). Teachers are forced to fund all of them, and everything they do.

Randi was semi-running and disheveled as she headed over to the media assembled after the Court heard arguments in the case. I do not know who the guy next to Randi or what he meant by his hand gestures. 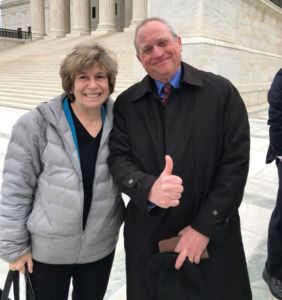 Here is the WSJ on Randi and the AFT:

The union, the United Federation of Teachers, has been canvassing its 187,000 members in anticipation of the Supreme Court striking down a pillar of public-union strength: the ability to charge so-called agency fees, which are assessed on nonunion members to cover the costs of collective bargaining.

Bracing for the worst, some teachers unions across the U.S. also have been holding parties and rallies—and even asking for signed re-commitments—to reconnect with the rank and file.

“We’re not waiting around to lose the case,” said Mr. Holstein. “It’s pretty obvious we’re going to be in some danger when this comes down.”

But here is the kicker:

The internal AFT slideshow predicts that if the Supreme Court rules to undercut agency fees, the increased time spent on “member maintenance” will detract from the organization’s “other more progressive union activities,” which are unspecified in the document. Some unions, it also warns, won’t be able to stay afloat.

AFT has never been about its members. The NEA in Minnesota has always worried about the AFT’s fixation on leftist trade unionism and politics versus serving teachers as educational professionals. It is not right that teachers in Minnesota have to subsidize AFT in order to keep their jobs.

[The photo of Weingarten is from her Twitter feed; it does not identify the man giving us the finger. The photo says it all.]

Teachers’ union message to its members: Your views don’t matter