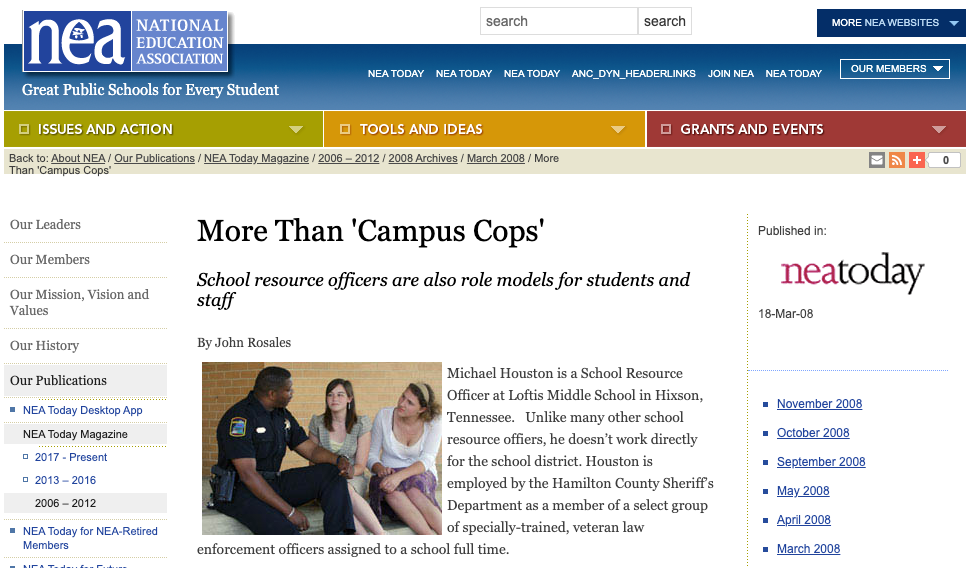 An article on its website (screenshot above) that called SROs “role models” for students and staff has recently been removed, along with an article titled, “Promoting school safety with a badge and a smile.” These were two of several examples of teachers’ unions past support of officers.

Why did the union decide to delete these articles? Is it ashamed of its own long-running role in the placement, funding and advocacy of SROs?

But why? Both the National Education Association and the American Federation of Teachers represent thousands of school security personnel, including SROs, reports Mike Antonucci. When President Obama proposed legislation in 2013 that included appropriating $150 million to hire SROs, both the NEA and the American Federation of Teachers supported the bill.

And teachers support SROs in schools. According to a recent survey by the EdWeek Research Center, only 23 percent of educators support removing police officers from schools. Thirty percent say officers are needed in their schools because “too many students are out of control.” Nearly 3 out of 4 teachers, principals, and district leaders say the officers are needed for protection against outsiders intent on doing harm to students and staff.

[A]s a teacher, I am not prepared, emotionally, legally, or in terms of training, to fulfill the role of safety officer. School staff, teachers included, are not always equipped to de-escalate high-risk situations, like brawls, potentially race- or sexuality-based violence, or use of weapons. These situations can’t — and shouldn’t — be handled by educators alone. Having safety officers in schools is about trying to ensure student safety. It’s also about making it so teachers don’t have to be first responders in dangerous situations, or assume legal responsibilities for developments far outside of the scope of their training.

Similarly, replacing police officers with “community members” or more social workers in guidance counselors does nothing to address that problem. As vital as community members and guidance counselors are in making a school work, there is no way that they can assume the job of a police officer without both committing to burdensome, physically demanding training, or taking away from their normal responsibilities.

Additionally, to ask school teachers to assume the responsibilities of a law officer is shifting a remarkable amount of labor onto teachers, who are already at the center of an overstressed, undersupported system.

If the teachers’ union no longer supports SROs that’s its choice, but it is undermining the preferences—and positions—of many of its members.

Educators, you do not have to financially support a union that ignores your concerns and supports groups that want to make classrooms less safe. Let Education Minnesota know its priorities are out of touch by opting out of union membership during the annual September Window (Sept. 1-30). If you create your letter here in advance, Educated Teachers MN will remind you by email to send your resignation letter in during the window.

Teacher Truths: You are not selfish for exercising your rights

Back-to-school looks different this year, and teachers have a lot on their minds. But that doesn’t mean they have to put their own needs on hold. If you have been considering alternative options to union…

Teacher Truths: You do not have to meet with your local union rep to resign membership

Minnesota teachers who are choosing to exercise their First Amendment rights and resign from union membership are being told they need to meet with their local union official before they can opt-out.

This meeting is not…